What is infertility? Infertility can be defined as the failure to achieve pregnancy after regular unprotected sex (without the use of any contraception) for at least a year.

Primary infertility is an extremely common problem, affecting more than one in seven (15 per cent) couples attempting their first pregnancy. Among those experiencing difficulty with conception, a male fertility problem is considered important in around 40 per cent of couples. In 15 per cent of couples it will be solely a male fertility problem and in around 25 per cent, there will be a problem in both partners.

Male infertility is by and large caused by the issues that have an effect on either sperm transport or sperm production. Through male fertility evaluation, the specialist may be able to come across the cause of the problem. Approx two-thirds of infertile males have the issue with sperm production in the testes; also several male fertility cases have been found of low sperm count, less sperm motility or morphologically unfit for fertilization.

Why do Men Get Fertility Problems?

There are several causes of fertility problems in men. They include:

A blockage in sperm-carrying tubes has many potential causes. The most common are outlined below.

Some men have congenital (present at birth) absence of the vas deferens on one or both sides. The vas deferens is the tube that conducts the testicular component of semen to the urethra, which then carries semen through the penis to the outside world.

About 10 per cent of men with an obstructive cause for their infertility will have this problem. The seminal vesicles (where other semen components are made) are often absent too.

Another rare obstructive cause is Berry-Perkins-Young syndrome, in which sufferers have a chronic chest disease (bronchiectasis), chronic sinusitis and obstructive infertility.

A blow to the testicles, which may occur in sport or during a fight, can cause swelling of the testicles, or bleeding in or around them. This probably causes the blood supply to the testicles to fail, resulting in permanent damage to the sperm production mechanism.

Mumps is the best-known cause, but is not the only one. Mumps will only affect fertility if it causes orchitis and, even then, only rarely. Undescended testicles (cryptorchidism) are another common cause of failure of sperm production. Male infants and children are routinely examined to identify this problem, as future fertility can only be preserved if surgical treatment to fix the testicles in the scrotum is performed in early childhood. Even surgery in infancy does not guarantee future fertility.

A varicocele is a dilation of the testicular veins in the spermatic cord that leads from the testicles to the abdomen. The role of this condition in causing infertility is uncertain and highly controversial. Varicoceles occur in 15-20 per cent of fertile men and 30 to 40 per cent of men with fertility problems. They can occur on either or both sides, but are far more common on the left.

They are best identified when the man is standing up and are often described as feeling like ‘a bag of worms’. Experts suggest that the varicocele either heats up the testicles or impairs their blood supply resulting in a build-up of body waste products, thus affecting fertility. The co-existence of other risk factors, such as smoking, with varicocele seems to have a greater effect on the risk of infertility.

Disorders of sperm numbers, movement and shape are common in men with infertility. Prolonged abstinence from ejaculation can affect sperm motility. Modern techniques can identify structural and biochemical abnormalities within the individual sperm.

Problems with chromosomes (packages of genetic material) occur in about 2 to 20 per cent of infertile men and can affect their fertility in two ways:

Problems with Erection and Ejaculation

Problems with sex are the principal cause of infertility in about 5% of couples. This can be due to:

There are several conditions that may reduce fertility:

Many drugs, both prescribed and those used recreationally can reduce fertility. Any fertility concerns related to prescribed drugs should be discussed with your GP – do not just stop taking them yourself.

Several media reports have highlighted research studies showing that sperm counts are falling and that male fertility is declining, possibly because of environmental pollution. A similar number of studies have shown no change whatsoever, but these do not make such good headlines and often fail to be reported in the media.

Is male fertility in decline? Because evidence exists both one way and the other, the answer must be ‘maybe’! One thing is certain, and that is that many more environmental toxins that might affect fertility exist now than 50 years ago. The table below may be helpful for understanding male infertility and its treatment options.

We Care IVF Surrogacy provides wide variety of male infertility treatment in Delhi, to conceive own child. Few treatments are as follow –

SSR or Surgical Sperm Retrieval is the surgical way to treat male infertility issue, where the fertility surgeon retrieves the sperm from the patient’s testes or epididymis. Under general anaesthesia, this surgery is accomplished by the team of We Care fertility veterans.

If you are facing with fertility issue (either male or female), you can contact our support team / or else you can fill the form, we promise we will come back with the best solution very soon. 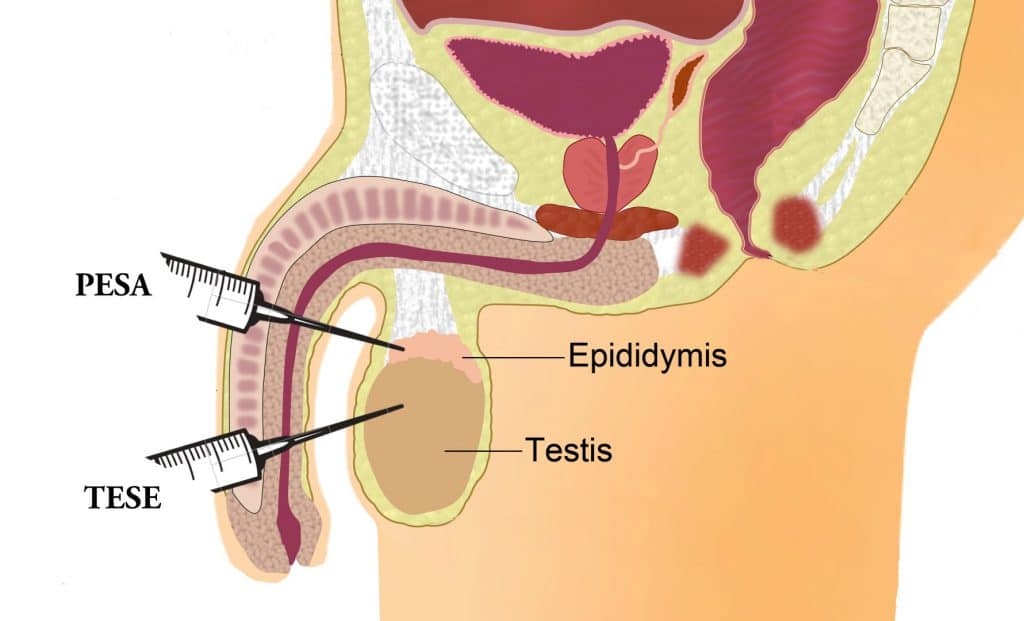 Here you have landed on the correct page! Whatever information you are finding associated to the PESA treatment, you are going to collect all the essential detail throughout this page. Management of obstructive and non-obstructive azoospermia by PESA Treatment in India with ICSI technique is not that complex and troublesome. Let’s learn more about the procedure and the steps of Percutaneous Epididymal Sperm Aspiration (PESA) along with the ICSI technique.

The injection of a single sperm directly into the center of an egg (ICSI) has now become the treatment choice for couples with a severe male factor. Pregnancy is prevented because poor sperm lack the progressive motility required to break through the outer membrane of the egg (zona pellucida) to achieve fertilization. We Care’s partner fertility centres have performed over 4000 ICSI procedures. Only 7% of patients fail to achieve fertilization. The first babies were born in 1994, and since then many healthy babies have followed.

The same technology (ICSI) may be used with sperm recovered from those with an irreversible obstruction to the outflow of sperm from the testis, for example men who have no sperm in the ejaculate (azoospermia). Nowadays, this is most frequently due to a failed vasectomy reversal. Other irreversible obstructions include patients with an absent vas, or from previous severe infection. And to treat this issue, our specialist retrieves the sperm by surgical process from the male reproductive organ and injects the most active sperm inside the egg (retrieved via IVF method) for fertilization. This is the most advanced technique till today’s date to get rid of severe male fertility issue. PESA Treatment in India is the best way to solve male infertility issue (when there is hardly any sperm present in the ejaculation).

Description of PESA Treatment in India

PESA Treatment in India is an outpatient basis procedure, where the patient after the surgical step, can go home (keeping some instructions and guidelines in the mind). PESA is performed under short general anesthesia. This is a surgical procedure, where the specialist inserts the needle and syringe technique to obtain a sample or needle biopsy. Needle is directly inserted into the epididymis.

PESA Treatment in India is the best way to say good-bye from your hard days of impotency.

Many couples now request vasectomy reversal in the hope of having a child when there are altered personal circumstances. However, in only approximately 50% do sperm return following reconstructive surgery and, even in some of these, pregnancy may not result because of the presence of sperm antibodies. The testis does not usually stop producing sperm which become “pent-up” in the epididymis, located on the side of the testis, leading to the vas. However, there may be a relationship between the interval of time since the vasectomy and subsequent pregnancy prospects as a lower success may occur if the vasectomy was performed eight or more years previously.

Until recently there were only a few ways for men with irreversible obstructions to become biological fathers. One way is for the man to undergo a surgical operation on the scrotum using a magnifying microscope to allow for retrieval of sperm from the epididymal tubules located in the collecting epididymis adjacent to the testis – this procedure is known as Surgical Sperm Retrieval procedure. And the other is for the couple to use donor sperm.

The choice all depends upon the couple’s desire, whether to go for SSR – PESA Treatment in India or to have a baby choosing donor sperm with IVF technique.

Embryo Transfer during the PESA Treatment in India

The factors influencing the outcome of treatment the embryos derived following ICSI will be transferred in preference to the conventional IVF ones, leaving the IVF embryos for freezing. This is because micro-injected embryos do not freeze as well as ones fertilized by conventional IVF. The management of patients after embryo transfer will be the same as our normal IVF procedure.

PESA Treatment in India has many advantages and is much more acceptable to patients who usually return to work the next day and who generally have no anxiety about its repetition if this is required. If sperm cannot be found in the epididymis we then proceed to a Testicular Sperm Aspiration (TESA). The surgical technique is very similar – the needle is simply inserted into the testis itself.

Treatment with IVF/ICSI/PESA carries a success rate of around 45%-55% per treatment cycle. This has been a tremendous advance for men with both obstructive and non-obstructive oligospermia. Prior to the development of these techniques very little help was available for men with such problem.

In summary PESA Treatment in India is value for:

Why Choose We Care IVF Surrogacy for MESA Treatment in India?

The team of We Care IVF Surrogacy consists of the lab technicians, nurses, fertility coordinator, senior coordinator, embryologists, junior IVF expert, and senior IVF specialist. The centres of we care are all based on modern infra and proper hygiene. Not just this, we are best in giving the best PESA Treatment in India along with a decent success rate.

If you have more question/any doubt about PESA Treatment in India, then you can directly call us or fill the query form. Our coordinator will soon contact you with the best solution!