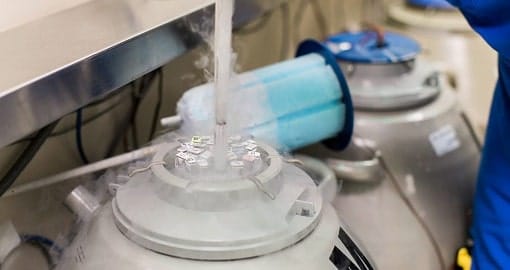 Oocyte Cryopreservation in India also known as egg freezing technique – one of the assisted reproductive services served to the childless couple for the preservation of their fertility. This option is best for those couples, who want to delay their parenthood.

For decades, sperm and embryos (fertilized eggs) have been successfully frozen for the purposes of fertility preservation and donation for men and couples. Although both sperm and embryo cryopreservation have become commonplace, oocyte preservation or the freezing of unfertilized oocytes (or eggs) for similar applications in women has not historically delivered the acceptable success rates necessary to drive adoption across the board.

Unlike sperm and embryos, oocytes did not survive the freeze/thaw aspects of the Egg-freezing process well primarily because the egg is the largest cell in the human body and comprised mostly of water. The water inside the cell forms ice crystals that destroy the egg during the traditional egg freezing process. Prior to 2002, the success rate of live births from frozen eggs was 1-3% globally, with few babies born from frozen eggs over decades of attempts. Fortunately, a number of advances in our knowledge of oocyte preservation, oocyte physiology and laboratory techniques are rapidly changing this fertility extension dream into a reality.

Benefits of Oocyte Cryopreservation in India

Oocyte Cryopreservation in India provides the ability to preserve unfertilized oocytes, a profound development in the field of reproductive medicine. Egg-freezing should appeal to a broad range of women. Ultimately, the common factors that link all of these women are the strong desire to have a family and the willingness to take proactive steps to give themselves the best odds possible.

Given the magnitude of the need, clinicians around the world have raced to develop a Oocyte cryopreservation technique for successful egg-freezing, and, beginning in 2002, promising results ranging from 20-40% successful pregnancy rate (on par with a woman’s natural peak fertility rate) were published. The key difference over previous techniques was the change in cryoprotectants used to protect the egg during the egg freezing process. Cryoprotectant acts as an “anti-freeze” to protect the delicate eggs as the temperature drops. Before attempting to understand how our ability to cryopreserve unfertilized eggs has been achieved, it is important to understand how sperm and embryo (fertilized oocytes) cryopreservation has long been commonplace.

The major problem faced in freezing a cell is to minimize damage to the membranes induced by ice crystal formation. Intracellular ice formation is dangerous because it may rupture the cell membranes causing cellular destruction. The smaller the cell, the less likely ice crystal formation will occur. Sperm cells are about 1/80th the size of a mature egg and thus can be easily preserved. Embryos, which are eggs that have been fertilized, are approximately the same size as mature eggs, but are much more likely to survive the egg freezing/thawing cycles. This is due to the fact that the eggs membranes undergo dramatic changes during fertilization, making them more likely to tolerate the stresses associated with oocyte cryopreservation and egg freezing. The use of cyroprotectants and highly controlled egg freezing/thawing rates have dramatically improved the survival rates of frozen sperm and frozen embryos. In many ways, the lessons learned from freezing sperm and embryos are being applied to freezing oocytes. However, the unique nature of the female egg has required additional study and technological developments. A number of oocyte cryopreservation egg freezing approaches have been taken in order to maximize the survival rates of frozen oocytes.

The greatest success has been achieved with protocols that use slow egg freezing/rapid thaw protocols. Critical to any egg freezing protocol is the use of cyroprotectants. Cryoprotectants act by a variety of means to reduce the amount of water that crystallizes within the cell and protects the cell during the egg freezing process. Common cyroprotectants include an alcohol (1, 2-propranediol), a carbohydrate (sucrose) and a solvent (DMSO). The concentration and the duration of exposure to most cryoprotectants (alcohols and solvents) are critical as exposure to high concentrations or exposure for prolonged periods of time can result in damage to the cell. We have found that increasing the concentration of sucrose (a relatively safe cryoprotectant that works by pulling water out of the cell) results in significantly improved survival rates, fertilization rates and pregnancy rates for frozen oocytes. We also have found that the removal of the cryoprotectant with progressive dilution is a critical step in the thawing process. If oocytes are placed directly in a medium without cryoprotectant after thawing, they can swell and burst.

The use of nonpermiating molecules (molecules that do not enter in the thawing cell) such as sucrose act to oppose the inflow of water into the cell and thus prevent the membrane from bursting. Others have recently undertaken investigations using a process called vitrification; a process that utilizes ultra rapid egg freezing techniques. While some pregnancies have been achieved utilizing this technique, it has not been shown to be more efficacious than slow freeze/rapid thaw protocols and is more susceptible to human error. This process exposes the egg to potentially damaging levels of cryoprotectant and direct exposure to liquid nitrogen. Exposure to liquid nitrogen is a critical factor in this age of concern over infectious agents. The infectious agents, while rare, can result in life-threatening illnesses.

This is a critical concern as the cryopreserved cells are stored in common tanks and a single tank may contain thousands of cells. Regardless of the egg freezing technique, the oocyte goes through a number of changes that make it less likely to fertilize using standard co-incubation techniques (the mixing of eggs and sperm together). The understanding that the zona pellucida (an exoskeleton that covers the outside of the egg) undergoes changes due to the premature release of the cortical granules (these are normally released at the time of fertilization and prevents multiple sperm from fertilizing the egg) is an important factor that has lead to improved success with frozen eggs. This has led to changes in how frozen oocytes are fertilized. Changes in the zona pellucida that blocks the ability of the sperm to fertilize the egg. With the introduction of Intracytoplasmic sperm injection (ICSI), the results in terms of fertilization, embryo development and the implantation rates (attachment of the embryo to the uterus) are approaching those obtained with fresh embryos.

To date, we are just reaching a time where it is becoming feasible for mature oocytes cryopreservation. These are harvested after taking fertility medications to induce the maturation of a number of mature oocytes. Women of this generation want more options and power when it comes making life decisions and plans. This is an exciting next step in the long line of developments in the field of women’s reproductive health – on par with the introduction of the birth control pill.

We Care IVF Surrogacy is the leading fertility platform that serves basic and advanced fertility treatments to the childless couple providing a decent success rate. The fertility experts and the team of We Care are veteran in respective domain. We are best at IVF, ICSI, IMSI, LAH, SSR, sperm/Oocyte Cryopreservation in India, and more. Providing full support and care, we come up with the best fertility agency across the globe.