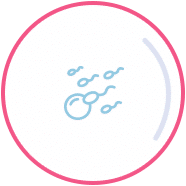 During the process of Surgical Sperm Retrieval in India, sperms are retrieved directly from epididymis or testis. This process also follows simple retrieval for those men who have a blockage that hinders sperm production. A man (patient) initially has to undergo anesthesia, and then the surgery begins.

We Care IVF Surrogacy is one of the leading IVF centres that put forward the best ART treatment and offer Surgical Sperm Retrieval in India in an affordable package with IVF/ICSI treatment with a decent success rate.

As mentioned above, for three conditions, the sperm is turned out by the testes. However, the sperm is unable to come out due to the blockage or absence of the vas. In normal ejaculation, sperm is not found in the seminal fluid. In this case, the sperms are directly collected from the epididymis.

If a male had undergone vasectomy surgery, the vasectomy reversal method would be suggested by the experts to get down. And in the case of non-obstructive azoospermia, there is a high possibility to recover the sperm by the SSR procedure.

During the case of Non-obstructive azoospermia (absence of sperm), there is a tiny percentage of sperm released and collected from the testes. If the Surgical Sperm Retrieval in India, in this case, is successful, then the success rate of this case is very similar to that of ICSI treatment with ejaculated sperm.

The senior expert of fertility best suggests the appropriate timing of Surgical Sperm Retrieval Treatment in India conjoining with IVF procedure. SSR process is always accomplished with the technique of IVF treatment.

Microdissection TESE (also Micro TESE) is a process performed before the day of a female’s egg retrieval procedure.

Various ways are there to collect the sperm from a male with standard sperm production and a blockage.
Collecting the sperm from a male, who has a testicular issue, is a pretty complex procedure, and the entire process takes few hours. In this case, Micro-TESE is performed with the assistance of a surgical microscope. The chances of searching for sperm are increased; during this procedure, the amount of tissue is taken from the testis is minimized.
It is vital to know that the magnifier used within the fertility centre’s room doesn’t have enough magnification to visualize the sperms. Instead, it (microscope) simply helps prepare that tubules among the gonad seem to contain sperm. Less amount of tissue is sent to the IVF fertility laboratory throughout the procedure so that the experts will assess whether or not enough numbers of sperms are harvested. The IVF laboratory employs a high magnifier microscope to monitor this tissue. Continual biopsies from one or each testis are obtained until enough sperm has been harvested for that IVF cycle. Other sperms could also be gathered to preserve for future cycles of IVF just if the present process is unsuccessful, or the couple needs a lot of youngsters within the future. This procedure will take as long as four hours, relying upon the time the sperms are found.
Given below is a summary of the procedures of Surgical Sperm Retrieval in India for sperm collection.

TESA- also known as Testicular Sperm Aspiration is one of the preferred surgical technique that is best used for those men, who have obstructive azoospermia. TESA is accomplished with the procedure of IVF/ICSI. This step is done with local anesthesia and is timed according to the egg retrieval of the female partner.

PESA is that process of Surgical Sperm Retrieval in India, which is suggested to those males, who have OA (obstructive azoospermia) or have an infection. This procedure is also accomplished with the ART technique- IVF/ ICSI. A man has to undergo local anesthesia before the surgical process of SSR and is matched with the timing of egg retrieval of the female partner. During this process, a fine needle is passed into the epididymis to extract fluid. This is then checked in the laboratory by the embryologist for sperm.

This procedure may be performed under GA or local anesthetic with sedation. A small sample of testicular tissue is extracted from the testes. This can be achieved by either a fine needle being inserted into the testes or a small incision being made.

Sperm that is extracted by the above procedures will then be used in conjunction with an ICSI cycle. ICSI involves a selected single sperm injected directly into a mature egg. The eggs will then be placed in an incubator and checked the following day for fertilization. An Embryo Transfer is normally scheduled 2-3 days following egg collection.

Microepididymal sperm aspiration (MESA) is a procedure most commonly performed in men with vassal obstruction. A scrotal skin incision is made, and the testis and epididymis are exposed. Using an operating microscope, a single epididymal tubule is opened and sperm aspirated. This procedure may be performed with a general anesthetic or a local anesthetic with intravenous sedation. An operating microscope is used to examine the very small tubules of the epididymis that contain the sperm. A dilated tubule is opened and the fluid is collected and examined for the presence and quality of sperm.

All of the sperm containing fluid is collected and taken to the IVF lab for processing, use, and freezing. If the fluid is devoid of sperm or only dead sperm are found, then another area of the epididymis is sampled. This is done until enough sperm are obtained to use and to store for future use. Adequate numbers of sperm are often retrieved allowing for cryopreservation and future ICSI cycles. With the advent of microsurgical epididymal sperm aspiration (MESA), sperm are retrieved in higher numbers than with PESA, allowing for cryopreservation of large numbers

Micro-TESE is that process of Surgical Sperm Retrieval in India when a male has an issue in sperm production and azoospermic. Micro-TESE is performed under general anesthesia with the aid of an operating microscope. This SSR treatment is timed up with the female partner’s egg collection step and is done on the day before the female’s egg collection.